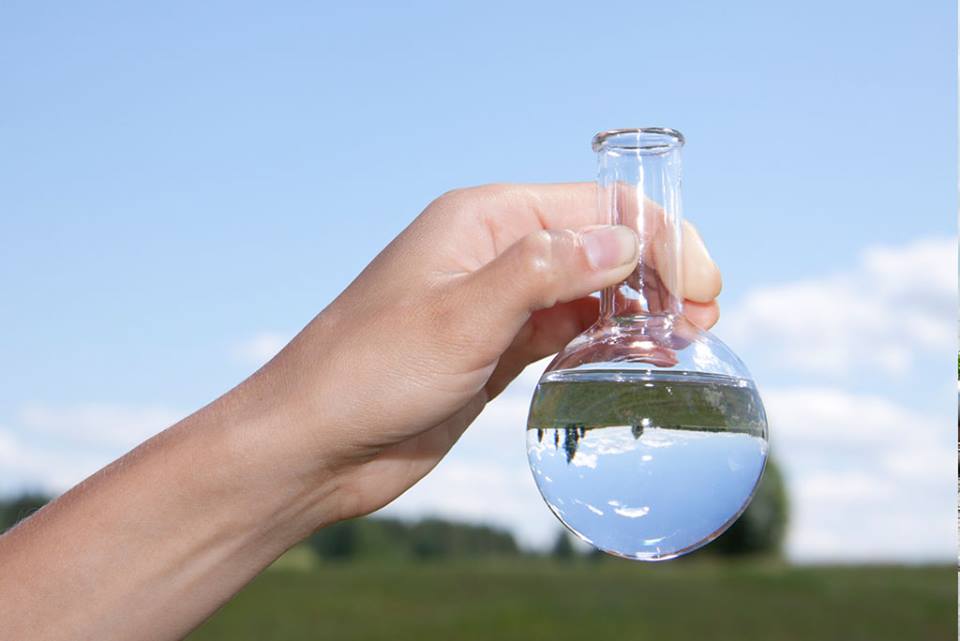 Jerusalem Water Undertaking is dedicated to insure clean, healthy and safe running water for its customer and to keep alert and be prepared to tackle any problems pertaining to water quality. JWU samples delivered water for regular testing at the resource sites and at different spots of the distribution system.

Produced water at Ein Samya Wells is tested and analyzed for bacterial and Chemical aspects. Specific chemistry tests are conducted biannually to analyze: positively charged ions (Cations) and negatively-charged ions (Anions),   low concentrated elements and soap- content. there are also, weekly tests to analyze impurity and conductivity levels, along with the chlorine- content. As for the distribution network, several laboratory tests are routinely conducted for impurity, conductivity and chlorine- content.

Furthermore, JWU conducts daily bacterial tests that covers the entire distribution system. For this end, the JWU service area is divided into four areas based on the delivered water source. Each  area, subsequently, is divided into sub-areas based on number of customers. Bacterial tests are allotted to the subareas in line with the recommended WHO number of tests per 1000 customers.

In addition to the internal JWU tests,  the Palestine Water Authority conducts irregular testing to the JWU water quality. The government Health Department, on its part, collects samples from subscribers’ houses for bacterial testing.

Formerly, the entire tests and analysis were conducted by the Environment Health and Occupational Safety Sciences Center at Birzeit University, however, JWU conducts all regular testing and also conducts sampling for the different tests for the other bodies.

Through creating new organizational units mandated with controlling water quality and protect water sources, JWU seeks to reassure its customers of its commitment to provide quality, health and safe water in line with highest  quality standards and specifications.

Up to this moment, a part of  exceptional cases, JWU proved to be safe and healthy and compatible with the internationally acknowledged standards.

JWU conducts regular bacterial tests for its different water resources on a monthly basis, or otherwise, whenever the need arises for such test. Until this day, results of such tests are compatible with the WHO recommendations. As for the distribution network, the results of 2015 tests were as follows:

The World Health Organization Guidelines state that success percent of tests should not be less than 95% of the total samples collected during a period of 12 months. The above results show that JWU drinking- water are compatible with the WHO guidelines concerning the total number of Coliform bacteria.

During the winter, Ramallah and Al-Bireh Governorate enjoy relatively high rates of rainfall, especially in the western parts of the governorate. This rainfall supplies underground basins in the (Eastern and Western) mountain cliff. The eastern parts, however, have lower annual rain rate, that gradually decline eastwards until drought near Jericho Governorate. The service area of JWU is covered with carbon chalk, while the underground basins are formed from calcareous and dolomite formations, like the ones in Jerusalem and parts of Bethlehem, Hebron and Biet Kahel. Those basins are divided by mostly calcareous clay formations, like the ones in Yatta, Bethlehem and Beit Kahel.

The mountain cliff is divided regionally into two reservoirs: a western mountain reservoir that pours underground water westwards, and an eastern mountain one that pours water east and east-southwards.  The two reservoirs split into two basins, one is upper and the other is lower. The upper basin extends from Jerusalem formation to the Hebron formation, while the rock surface of the lower basin starts at the convexity axis of the west bank terrain, and alters as we move to the east and west until it shrinks and could be reached by wells.

There are no precise estimations for the safe productivity of the underground basins in the governorate, yet waterfall feeding estimations were available in several sources. According to the sources, the total annual feeding of the western reservoir, (the one with higher capacity) that extends from the West Bank convexity axis towards the 1949 truce line in the west, is 360 million m3.  While, the eastern reservoir feeding is 172 million  m3 . according to the Oslo Accords, in the second phase, the Palestinians would be allowed to annually  utilize 70-80 million m3  of water for future development.

Due to the current state of affairs, with regard to using underground reservoirs, and because of some hydrologic factors, Ein Samya well field (in the eastern reservoir) represents  the only  water source for JWU. This field is located 20 Km to the east north of Ramallah  at the middle of the way to the Jordan Valley.  It is lower by 500 m of Ramallah and 400 m above the sea level.  Ein Samya well field dates back to the Roman era or even prior to it, and is named after prince Samya. Remnants of a mill, a water canal and mosaic floor  from the Roman and Ottoman eras were discovered at the site. The contemporary history of Ein Samy, as a well field has started after 1948 during the Jordanian era.

The following map represents the speculative boundaries of the West Bank reservoirs, their estimated production capacity, and the location of Ein Samya wells:

JWU has attempted two excavations in 1996 and 1998 in two selected locations in Ein Sinia north to Ramallah. Excavation reached the lower rock formation parallel to the Krunb basin in Jordan, but achieved no significant success in both sites. Both wells were closed and considered fertile, but they were spared as potential monitoring wells.

Another potential underground water resource for JWU is in the northern part of its service area, which is located over the northern rainfall catchment. Unfortunately, despite our critical need to water, the Israeli government does not allow JWU to develop any water resources in that part of the catchment. Thus, Ein Samya well field currently is the sole JWU owned water resource.

Following is a brief description of the currently operating wells in Ein Samya area.

Under the institutional development process, the JWU council of Directors set the strategies and tactics to protect  and preserve the underground well fields owned to JWU, and also to protect the JWU water delivery system as follows:

According to the latest figures, JWU is compelled to buy about 85% of its current drinking water needs from the Israeli authorities. Any restrictions on running water procurement, thus, could have a very serious impact on the delivered water to the JWU subscribers. JWU is rationalizing water deliveries in all its service areas, since it is unable to buy additional water quantities to meet the increasing demands of water.

The council of directors and the JWU management have realized the gravity of such situation, so they are more eager to exert their best efforts to increase water deliveries from the JWU own resources, including those in the west reservoir. The goal is to decrease dependency on the external sources and decrease water shortage in the coming years.  However, until this moment, JWU has not been successful in increasing the imported water except from Shu’fat line, where it was able to buy additional water quantities with high prices.

Ramallah and Al-Bireh Water Company installed the original distribution network in the early 50s of the past century. In that time, they used to plumb pipes to connect water to a subscriber but not to feed a street or an area. Most of the plumbing was done over the ground and in the lands of the others, and in some cases, a subscriber would be  allowed to buy pipes and metering devices to connect water to their building and install it on their own expense. This produced a messy water network characterized by high loss percentage and high maintenance cost. Moreover, JWU inherited worn out water networks in the villages of Dir Dibwan, Bitin and Kufr Malek, causing the inappropriate delivery of water and enormous delivery difficulties.

Today, JWU uses steel galvanized pipes with diameters from 3/4-2 inches threaded from both ends and connected to each others with nipples according to the applicable international specifications. The pipes are coated with three layers of Epoxy, Polypropylene and Polyethylene. 3-24 inch pipes lined with cement and coated with Epoxy, Polypropylene and Polyethylene are also used at the JWU. These pipes are connected through welding in line with IS530, BS 534 specifications. JWU started in 1998 using Ductile Iron Pipes with 4, 6 and 8 inch diameters.

During the past ten years, JWU was able to rehabilitate large parts of water networks with funds from the German Development Bank KFW, with a total amount of 13 million Euros. 58 water network rehabilitation projects, along with a transmission line were implemented under this program. JWU network renewal percentage mounted to 35%. This project has contributed to decrease water loss to 25.6% in 2013 compared to 32% in 2008.

As a complementary to the first project to decrease the lost water, the KFW granted the JWU a donation to develop the Inclusive Drinking Water Plan. The plan was finalized by the end of 2015 and included stages to develop the network until 2040. The plan has been formulated according to the data of the following census:

The JWU adopts the closed loop system in its network to deliver water to its subscribers in the cities and villages. The current length of the distribution network is about 1350 km. the next chart represents development of the network length in kilometers during the past 41 years.
Distribution Network Development During the Past 41 Years

Network Rehabilitation Projects During the Past Ten Years

In light of the goal to unify and upgrade current maps of the  JWU delivery and distribution network, JWU started with German assistance through GIZ to prepare automated maps for the delivery and distribution maps. JWU considers this a vital action to facilitate documentation and access to the maps, which results in providing a concise database for the existing network. JWU continued to develop distribution plans until building an inclusive database and GIS. All the water networks have been transformed into the application along with subscribers data. Through the inclusive drinking water plan funded by KFW, the database has been developed and upgraded so as to facilitate access by the JWU staff to view the water networks plans and subscribers data by any staff member making work easier to handle and process.

This program still needs development in terms of precision of plans and being representative of the reality of the network on ground. The project needs large funding  to conduct field mapping of the JWU water network, providing that all the new networks and lines are already transferred with high quality on the GIS.

With aid from the GIZ, the IT department developed a remote control and monitoring system for the water flow and pressure ant the JWU delivery and distribution network. This system is being installed by a national company and it was operated with excellent capability.

20 sites and facilities of the network shall be connected to this system on a microwave wireless network with a 2.4 gigahertz frequency. Optical fiber cables have been used in some sites with geographical nature that do not permit wireless connection.

Regional Assessment of the Distribution Network

This department is tasked of producing and distributing water, maintaining network, setting up water pipes,…